As my birthday was just yesterday, I can’t help but reminisce about my 30th birthday, which took place a bit ago…

I have a mild obsession with Michael Jackson, so it was only fitting to throw a Michael Jackson themed birthday party, right? Who doesn’t have an MJ party?

There were a lot of projects involved with this, so I’ll go over each one separately:

Venue/Music: Every few months my friends would trek to Long Beach to go to 80’s night at the Gaslamp. There is an amazing 80’s cover band, Knyght Ryder, who plays every Friday. What better place to throw an MJ party than at an 80’s club? I reached out to the band ahead of time and requested they play as many MJ songs as possible that night, and they obliged – I even got a shout out on the dance floor!

Invitations: For any event I love sending physical invitations in the mail, everyone loves getting something in the mail – especially if it isn’t a bill. I enlisted the help of a Graphic Designer friend and we created Concert Ticket style invitations. They were extremely tongue in-cheek, but were very cute. I mailed these out in plain white #10 envelopes as that’s how you’d get your tix back in the 80’s! 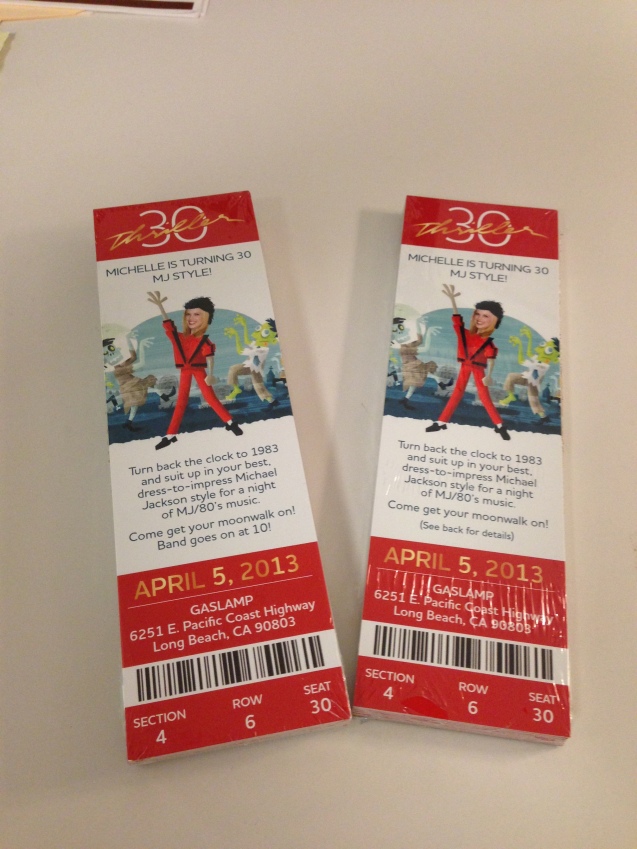 Costume: For my MJ party, it was requested that everyone dress in their best Michael Jackson gear, even if that just meant a white tee and black pants. For my costume however, I had something grander in mind.

I had scoured the internet for women’s MJ costumes, I know right? But funny enough I actually found some, and they were sexy at that. Yes, Sexy Michael Jackson! They were hysterical, and expensive. I couldn’t bring myself to purchase one even though they were adorable, they’d likely be made out of cheap material and not fit well. So I went another route and made my own!

Basically I wore fake leather leggings and added embellishments from the Fabric store to a red Old Navy tank top to re-create one of MJ’s most famous looks. I made “sequin socks” from fabric and made wristbands from sequin trim. I wore high heels and a pair of aviator sunglasses. For my hair, I slept in small wet braids and then just pulled my hair into a low ponytail and left the front section out over my eyes.

I also purchased an LED light up sequined glove on Amazon, which are probably normally for ravers – but it was super fun and it changed colors.

Decorations: Since I had tables reserved and a pretty big group I wanted to decorate the tables.

Centerpieces: I found some rad art on Deviant Art that someone had made of MJ in all his different looks and printed them out to fit into old CD jewel cases (the thick ones). Then I glued the jewel cases together to make a cube without a top using hot glue. For the flowers I bought two large bouquets at the grocery store and split them among the different centerpieces, inserting the flowers into floral foam that was inside a small galvanized plant pot. Once the arrangements were made I simply dropped them into the middle of the cubes. I added some small rocks to weigh down the flowers and keep them in the middle. 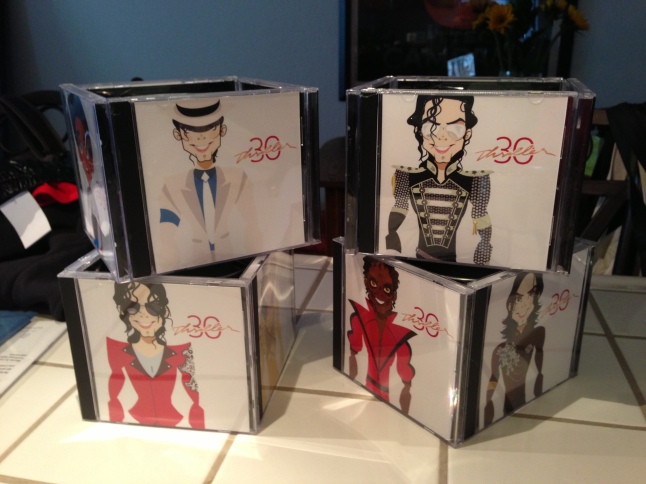 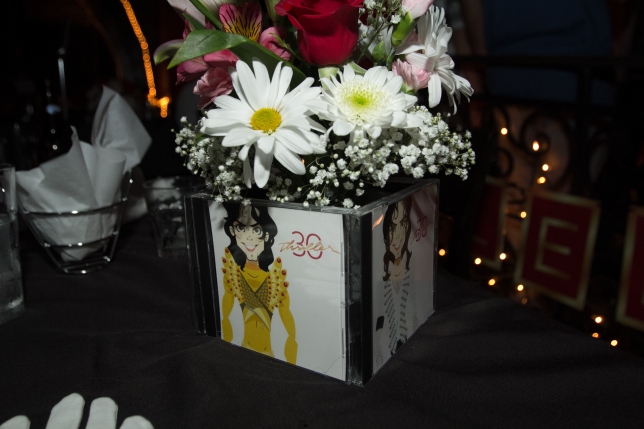 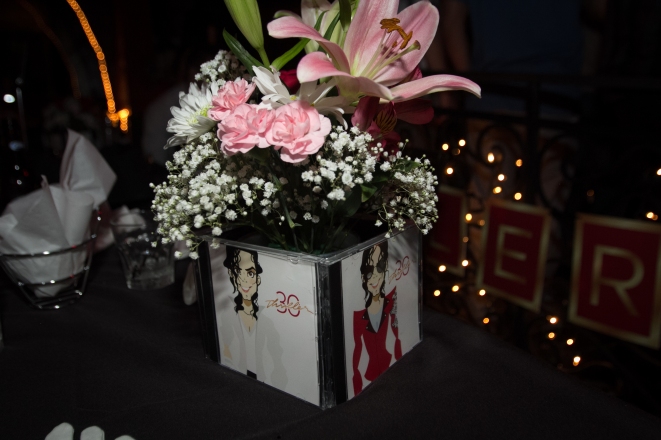 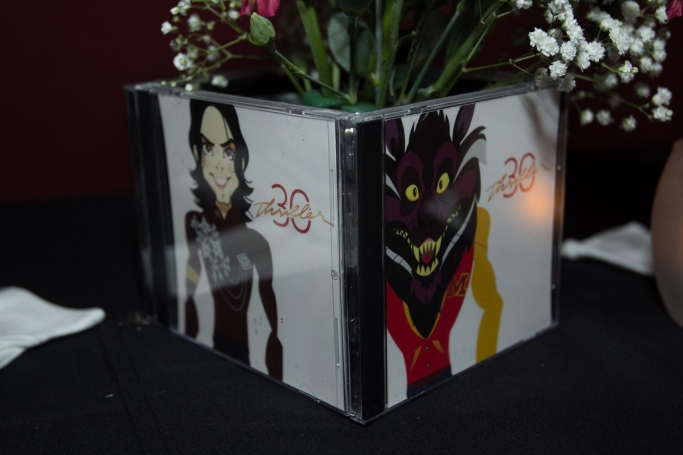 Table Runner: Since not everyone would come in costume I wanted to provide some items for people to wear, so I bought a box of white cotton gloves from a medical supply company. They are actually to keep ointments from getting on your clothes/sheets. Lol. I sprayed each of them with glitter spray, which ended up just being a waste of time since you really couldn’t see the glitter. I laid all of the gloves out down the center of the table and guests were able to grab one and wear it during the party – which pretty much everyone did!

Banner: To mark our area, using the same art from the invitations, I made a banner that read Thriller 30 and displayed it near our table.

Michael Jackson: You can’t have a Michael Jackson party without Michael Jackson! I bought a cardboard standee of MJ on Amazon and he was with us at the party for photo ops as well as even made an appearance on the dance floor. Oh Michael. 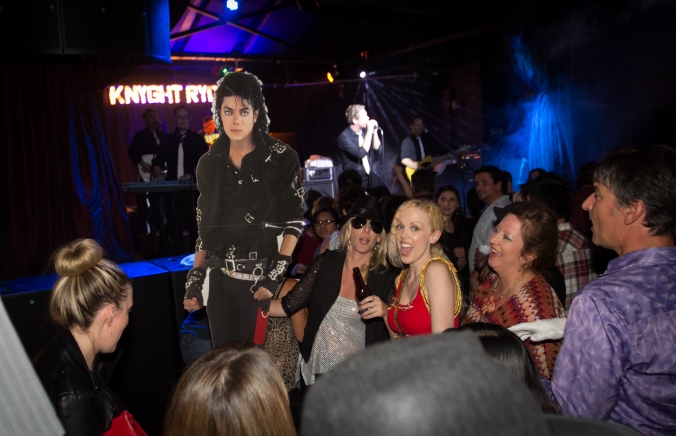 Dessert: Every party has to have cake! NOT! A close friend had invented a dessert for my birthday a few years back, and in my honor, named it Michael Jackson Surprise. So I couldn’t serve anything less for my Thriller 30. Michael Jackson Surprise is essentially Rice Krispy Treats, but with Cinnamon Toast Crunch and a secret ingredient (I think it’s vanilla). I cut each into squares and put them in individually treat bags, sealed with a Thriller 30 sticker. I made these a week or two ahead of time and just threw them into the freezer, pulling them out a day ahead of the party to thaw. I piled these in the center of the tables for the taking. There was not one left at the end of the night. 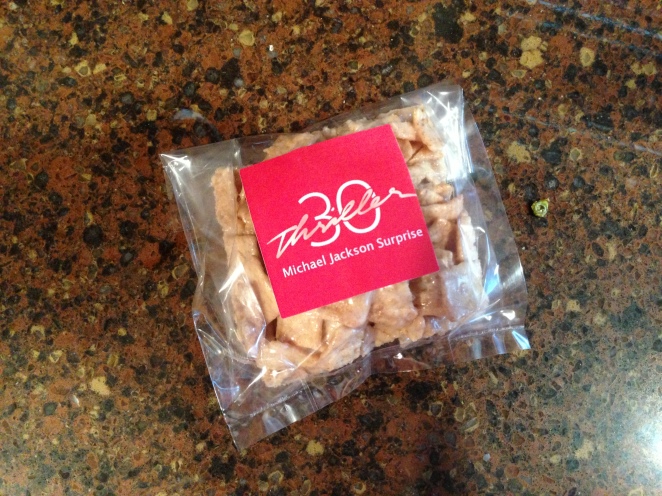 Photographer: Since I went to so much trouble, and it was a milestone, and I knew I would be having too much fun to take pictures I hired a photographer. This was great. It was a friend of a friend so she didn’t charge much and I didn’t have to worry about getting photos in. I even got a lot of great candid shots of everyone on the dance floor. I just checked with the venue first to make sure it would be OK. 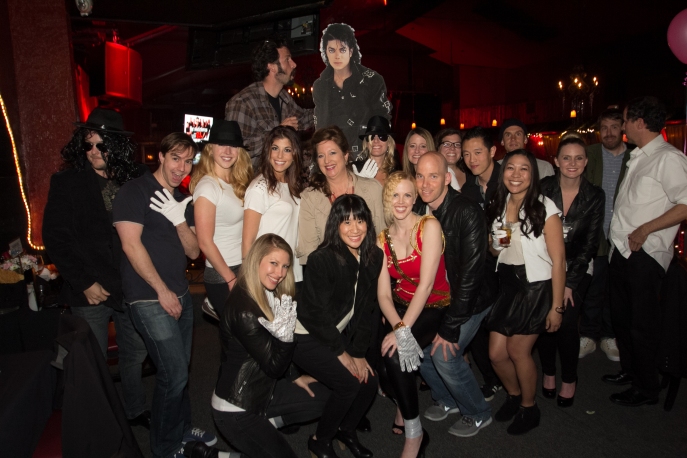 The party was a blast, and the best part was, there was basically no clean up. Everything I brought pretty much went into the trash, except my costume – which I’m holding onto to bust out for Halloween one of these years!